Happy Thanksgiving! We leaped from #23 to #12 on the CMJ Jazz radio chart! We are blessed with wonderfully supportive program directors, radio listeners and fans. Happy holiday to you and yours!

“A pleasing mixture of smooth blues, funk, and jazz, Green, the third installment in Rik Wright’s Fundamental Forces’ trilogy is groomed in a world music palette twining balmy atmospherics with a bebop-ish arc.”

Here’s the debut on the CMJ Jazz Radio chart for the new CD “Green” – we hit the chart at #23!

Another review… this one makes me blush… 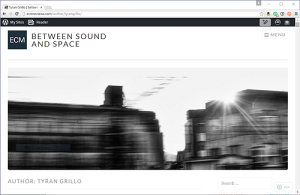 With the release of Green, Seattle-based guitarist and bandleader Rik Wright has reached the highest point of his career thus far. In completing the additive colors trilogy begun by Blue and Red (released 2013 and 2014, respectively), this album takes the unity shared with bandmates James DeJoie (reeds and flute), bassist Geoff Harper, and drummer-percussionist Greg Campbell, to its most intense levels of focus yet. As Fundamental Forces, the uncategorizable quartet continues to not only push the envelope, but also fill that envelope with a truly original songbook—signed, sealed, and delivered to the discerning listener. If Blue introduced the voice and Red gave that voice a stage, then Green is the mind that shapes its every note, signaling a giant cognitive leap into the future of an artist who breaks as many barriers as he brings together.

If there’s one thing you can count on in Rik Wright’s music, it’s a balance of abandon and meticulous control. Enchantingly, this fine line blurs even more for the third round, even as it comes across more boldly than ever. And in the track “Harmonic Tremor,” one can see just how far the band has come in that very regard. This tune follows the compositional formula that works so well for Wright, twining melodic reed work and bright drums around a core groove of guitar and bass, but takes it to unexpected places via DeJoie’s gritty baritonism, Wright’s elastic commentary, and Campbell’s artful shuffling. Such is the band’s commitment to equality, which through the vital contributions of its members forms a distinct whole. One hears it in DeJoie’s acrobatic alto playing (“Contradiction”) and in the lilting flute of his own “Alicia’s Waltz” (the only track of the set not from Wright’s pen). One hears it, too, in the rhythm section’s evocative pacing throughout “Patience” and “Sugar Crash.” Regardless of which musician you focus on, every contribution is more lucid than the last.

Wright’s music has always been characterized by its immediacy, and on Green, perhaps more than any other album, immediacy gilds the niche that Fundamental Forces has already carved. Be it relatively brief, as the emblematic guitar solo “Sunrise Pixels” and the concluding “Overcast” (in which Wright and DeJoie strengthen the sunbeams of their harmonic relationship), or expansive, as the 10-minute “Wanderous,” the quartet brings full, cinematic charge to its playing. The latter tune is a landmark achievement, unfolding patiently and featuring a beautiful color shift to clarinet. Here, as throughout the album, Wright’s guitar reveals its phases like the moon, taking on the light of a hidden sun and turning it into song. Despite, if not because of, the hefty length of this track, it pushes through space and time with the quiet grace of a comet.

Although this album completes a broader project, it stands on its own feet as an example of a pure love of music making. And from this vantage point, the future looks bright for Wright indeed.

RIK WRIGHT’S FUNDAMENTAL FORCES/Green: The guitar ace that seems to love writing for sax players rounds up the gang once again for a set that feel suspired by early 70s Miles. That may sound like a peck of contradictions but we already know how many hats you have to wear these days just to get through the day. No matter, let the bitches stew about this bitches brew, Wright isn’t manqué-ing around here and his crew is on the money throughout. A winner of a date for anyone looking for progressive jazz that doesn’t roll off the rails, Wright is doing even more of his right thing here. Check it out.

This is probably my favorite review ever because the writer calls out the brilliant contributions of each member of the band. A few excerpts: 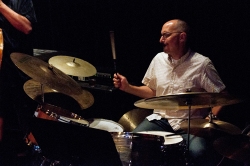 “my head was left spinning by Greg Campbelll’s innovative performance throughout… There are of course some excellent drum solo’s, but the more impressive notes from Campbell come from his waltzing in and out of each track, changing it up midway through a track and then seemingly improvising before switching back into the structure of the tune” 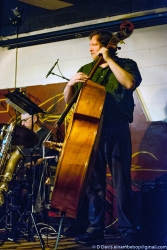 “Geoff Harper’s bass playing is so engrained in the mixture of sound that you hear it, but you don’t really hear it. There’s never a moment where I felt like Harper was flying off into his own groove, but no doubt there’s just something incredibly soothing about the way he creates a foundation of calm amongst the plethora of sounds coming from everyone else. 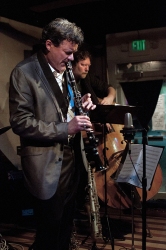 “a track like Patience which features a slow cool Jazz fusion of Rik Wright’s subtle guitar melding with James DeJoie’s Sax playing, quite literally. Wright has his time to shine, as does DeJoie, but the cusp of the song features the two players in tandem challenging you to listen deeper, defuse the harmonies of both, and to be impressed by their ability to play so tightly around one another.”

The full review is here.

It’s so awesome when somebody completely gets what you are going for! Also, my band is incredibly awesome. Thanks guys!

We’re the #1 add to CMJ Jazz station playlists this week. Let’s see where this takes us!